75% of damage
Killer Queen: Bites The Dust is the evolved (though technically Requiem) form of Killer Queen, the Stand of the main antagonist Yoshikage Kira featured in JoJo's Bizarre Adventure: Diamond is Unbreakable.

Like Killer Queen, this Stand is extremely powerful, as it also does a lot of damage with its explosive abilities. Along with its additional Bites The Dust ability, this Stand can be extremely dangerous and powerful during combat situations.

In appearance, Killer Queen: Bites the Dust is a very detailed Stand. Its crown is flat, while two sharp, triangular shapes resembling cat ears stand on both sides of the top of its head. Its eyes comprise cat-like vertical pupils in front of its generally red-colored sclera. It has no nose, and its mouth is not visible, due to the black mist surrounding it.

It wears dark grey, studded, leather-like forearm-length gloves, mirrored in style by a garter belt-like band at its waist and ankle-height footwear.

Four short spikes line the top of its back. Its shoulders, the hands, belt buckle, front of its crotch, ankles and the top of its feet all bear the emblem of a skull with ears resembling. Overall, this stand has a similar appearance to Killer Queen, only having red glowing shining eyes and a dark mist/aura surrounding it, with the same model as Killer Queen. When Killer Queen: Bites the Dust isn't out, it gives the user red glowing eyes and a dark mist aura.

KQ:BTD, if used correctly, can be one of the most terrifying Stands to encounter during a PvP scenario. Possessing two unique, and very powerful passives: its ability to plant bombs on anything, and every bomb being an AOE, allows users to either destroy opponents as quickly as possible, leaving them with no time to react, or set traps and explode opponents remotely, resulting in little to no damage being done to the user

Every single move KQ:BTD utilizes are capable of dealing an incredible amount of damage, with every explosive move being able to induce ragdolling. Its Enhanced SHIBO Barrage (E) is capable of doing up to 300 damage (full duration), while crippling the opponent's speed. Primary Bomb/First Bomb (R), KQ:BTD's signature explosive move, is able to dish out a maximum of 55 damage, much higher than most other stand's Heavy Punches. Explosive Homing Bubble (Stray Cat) (T) performs as the name implies; the creation of a homing remote detonation bomb, that is completely invincible. Yen Coin Throw (Y), KQ:BTD's only ranged move, is technically the most powerful projectile in the game, capable of dealing the same amount of maximum damage as KQ:BTD's (R). If a user is facing an opponent that relies on aggressive rushes, Explosive Grab (H) cuts their assaults short, immobilizing the opponent and explodes them straight up. Have an idle bomb sitting somewhere and need to plant it somewhere else? Bomb Transfer (J) allows you to do just that without having to explode then and replant a new bomb, saving the user precious cooldown seconds in a PvP.

If all else fails, every KQ:BTD user has one more deadly trick up their sleeves. Killer Queen: Bites the Dust (F). After planting this bomb on a player, this allows the user to explode every single player around/near the user. (apart from the bomb holder him/herself), without fail. During this move's activation, the user poses in the air while gaining nigh indestructibility. Every user affected then gets reverted to their previous positions in the past few seconds, and then explodes.

While being a short-ranged Stand, with only one ranged projectile, KQ:BTD makes up for this through its ability to dish out an incredible amount of damage at once. Having pretty much every move being an AOE attack is incredible, allowing you to take on multiple opponents at once. Plus, every bomb move is able to bypass block, while also inducing ragdoll.

Being able to convert any solid surface into a bomb, combined with your (T), the Stray Cat Bubble, allows you to keep your opponents constantly on the move. This means that they are either forced to run from you or attempt to get close, resulting with them being exploded, one way or another. Your barrage is also a handy tool in keeping your opponents locked in place for a short amount of time, allowing combo opportunities. 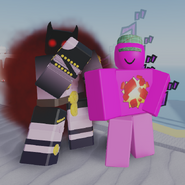 Killer Queen: Bites the Dust and its user menacingly posing. 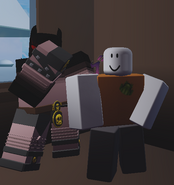 KQ:BTD's pose with an older model. 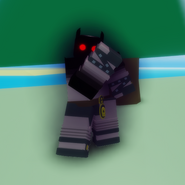 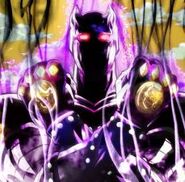 The Scene KQ:BTD's design is based off.

The clicking sound shared with R, T, Y and H:

When the user pulls out their Stand:

When you pull your Stand back: