A Bizarre Day (Roblox) Wiki
Register
Don't have an account?
Sign In
Advertisement
in: Specs, Shiny, Non-Stand,
and 8 more

60% of damage
Kars is classed as a Spec or ability that was also featured as a main antagonist in JoJo's Bizarre Adventure: Battle Tendency.

Kars is arguably one of the fastest Abilities in-game, as it has a variety of stun moves and a powerful barrage rush. The spec also has a long-range projectile move, making it viable in normal ranged combat if this spec is utilized correctly. It is also one of the rarest spec among the game. This spec also has a shiny version of itself: Golden Kars, which can be obtained by using a Golden Vampire Mask on Kars.

In order to get this ability, you must use a Stone Mask while having the Vampire Spec. However, there is only a 1/18 (5.5%) chance of obtaining it.

Kars is technically referred to as the pair of grey pillars that go on both the user's arms, each having a blade on their respective sides. There are also circle-shaped indentations on the front of both blocks. When the Determination ability is used, there will be a bright white effect that would light up on the front of the blade.

The blades themselves are also reflective and are curved back towards the user, similar to a sickle. As for its appearance in Roblox, this spec will not appear correctly on newer default avatars, as it was intended to fit on older default Roblox Avatars, more specifically the blocky-styled avatars.

The spec also doesn't include blades on the user's legs, unlike in the anime. The spec also has a color scheme of mostly black, with the blocks on the hands and the blades having a color of black and grey.

As for it's shiny, Golden Kars has the same appearance as Kars, however with a more yellow scheme in it. The user also gets a golden aura.

Sporting amazing maneuverability, above-average health, and insane damage output, Kars is an extremely deadly Spec. Combined with its blood suck enables Kars users to fight toe-to-toe against even the toughest of stands, including Gold Experience Requiem and OH stands. Kars also has the nice added advantage of taking 25% less damage from Hamon, while dealing 25% more damage against any vampiric abilities (Vampiric The World, Vampire, Shadow The World).

With a lot of moves at your hand, you are set for any PVP scenario. Kars has a Blood Suck move (T), which damages the opponent while restoring 1/8 of the user's health, so don't be afraid to rush your opponents head-on. Determination (Q) allows users to run faster, jump higher, and strike harder temporarily. A full-length Light Blade Rush (E) allows users to deal with a staggering 400 Damage. Superhuman Punch (R) allows users to knock away their opponents, simultaneously rag-dolling them as well. Surprise Kick (H) stuns the opponent, allowing for good combo opportunities. If your opponent tries to flee on low health or is simply out of reach, Projectile Slash (J) allows you to finish them off. Light Blade Dash (F) does the most damage, while also knocking opponents back and rag-dolling them. There is a chance that this move (F) can double-hit someone if you perform the move at the right distance and timing.

The moves Pillar Man Dash (V) and Pillar Man Jump (Z) allow you to quickly gain on your opponent or run away if you need too. Combined with the ability to roll (C), allows users to dodge and weave their way towards their opponent, avoiding damage from ranged attacks.

Kars has a very small effective range, with all but one of his move-sets being melee attacks. In general, you should try and play aggressively; rushing your opponents, leaving them no time to break the distance between you. Remember to use (Q) whenever you can, as it gives you a quite significant boost to your stats, and keep yourself healed with your (T).

On top of dealing damage while healing you, (T) allows you to immobilize your opponent for a short duration while drawing them close to you. After this brief period, before your opponent has time to react, you are able to pull off some impressive combos.

Kars evidently lacks ranged moves. However, your speed and maneuverability makes up for this, allowing you to constantly pursue your opponents. Unless you're going against a Made in Heaven during time acceleration, you will sure to be able to keep up.

Kars is a speedy spec so use that to your advantage. Using dash + light blade spin is a surefire way to screw your opponent up.

Note: Enabling Q allows moves to be more powerful due to the damage boost, while also making it easier to catch up to opponents due to the speed boost. 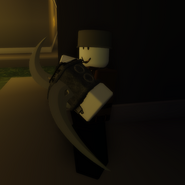 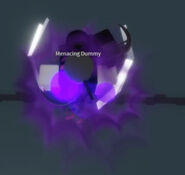 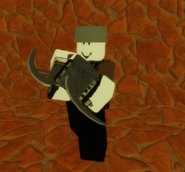 The appearance of Kars and his blades in the Anime. 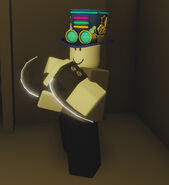