"Well, this sure is proof that no one can deflect the Emerald Splash.” - Hierophant Red (Haierofanto Reddo, ヒエロファントレッド)

Hierophant Red (occasionally named Hierophant Green (Over Heaven) or HGOH as stated on the Discord server) was an Admin stand made by one of the former game's Developers, now Head Developer, Futurish. It acts like a regular Hierophant Green but with a lot of strong moves attached to it.

The appearance of Hierophant Red is pretty simple, as it is just a model of Hierophant Green, but with a darker color scheme, almost resembling a ruby type color. The stand has dark red eyes, with red, black, blue and grey covering its overall model.

Here are some links to the videos recorded of the stand: 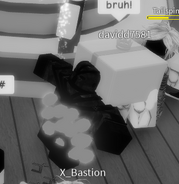 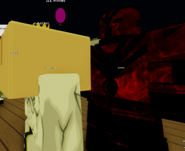 Another glimpse at Hierophant Red. 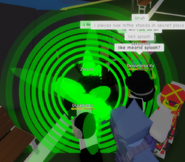 Hierophant Red using Self-Healing Barrage.
Add a photo to this gallery
Retrieved from "https://a-bizarre-day-roblox.fandom.com/wiki/Hierophant_Red?oldid=602697"
Community content is available under CC-BY-SA unless otherwise noted.