50% of damage
​Hierophant Green is the Stand of Noriaki Kakyoin, a main ally featured in JoJo's Bizarre Adventure: Stardust Crusaders.

The Stand is often used at medium to long-distances, and it has a large number of abilities to assist it in ranged combat. However, the Stand is relatively weak in direct hand-to-hand combat, as a trade-off for its great distance-based abilities.

This Stand is a part of the Arrow Stand Pool, in which it has a 10.6% chance (D-Tier percentage) of obtaining from a Stand Arrow.

Hierophant Green has the appearance of an average human. However, the main focus of its appearance surrounds its robotic features, with its eyes and skin texture looking artificial instead of humanoid.

Hierophant Green possesses a body covered in what looks like neon green slime, which is protected by white-colored armor, with the armor covering its legs, face, arms, hands, and chest.

It also wears pads that cover its shin, a belt that surrounds its waist, and what looks like to be squared shaped pads that covers its legs. All of these are seen to have a white color. Hierophant Green is consistently portrayed as being green and white across all media featuring it, befitting its name.

If you're new to Hierophant Green, use this as a guide. 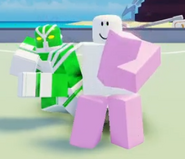 Hierophant Green as seen in the anime.