"What is "courage"? "Courage" is knowing fear and making that fear your own!" - Will Anthonio Zeppeli (Wiru Antonio Tseperi, ウィル・Ａアントニオ・ツェペリ)

Hamon User
Hamon Warrior is a new NPC that has been added to help the player in combat. According to the Discord server, they will be recruited via Speedwagon. This is the only NPC (That can move) that helps the player.

Hamon Warrior is based on Jonathan Joestar, the main protagonist of the first part of Jojo: JoJo's Bizarre Adventure: Phantom Blood. 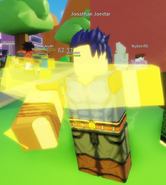 A Hamon user (Jonathan Joestar) vs Dio Brando.
Add a photo to this gallery
Retrieved from "https://a-bizarre-day-roblox.fandom.com/wiki/Hamon_Warrior?oldid=597312"
Community content is available under CC-BY-SA unless otherwise noted.