Gyro Zeppeli appears as an NPC in-game. When interacted, he will say:

Gyro Zeppeli is resting next to a tree. He has blond hair, a brown hat, a purple shirt, orange pants and a custom face. He wields steel balls near his hips, identical to Spin.

If you interact with him, you can obtain the Spin spec for $10k. A GUI will pop up asking if you'd like to know the Spin. If you say yes, your current ability will be replaced with Spin at the cost of $10k. If you say no, he will stop talking to you.

By a wood fence, which is on the corner of the map and is close of the tunnel where Potwagon Foundation Member was, and close to the Made on Hallow's Eve statue.

Gyro Zeppeli used to be under a tree. However, his location was changed in the Halloween update.

Gyro's location in the new map. 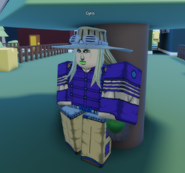 Gyro in the new map. 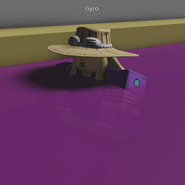 Gyro in the first part of the Halloween 2020 event. 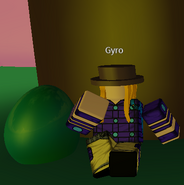 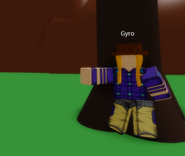 Gyro in the oldest Map. 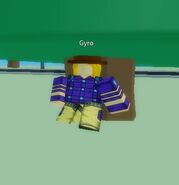 Gyro in the older Map.

Gyro Zeppeli in the manga.
Community content is available under CC-BY-SA unless otherwise noted.
Advertisement