"Let me see the look on your face at the moment your hope burns out... and your life reaches its end! Show me your despair as you fall!" - Cioccolata (Chokorāta, チョコラータ )

A+
Green Day is the Stand of Cioccolata, a minor villain featured in JoJo's Bizarre Adventure: Vento Aureo.

Green Day is a dangerously overpowered Stand, with its main ability being producing a mold that has can spread through far and wide amounts of area. The mold's growth is triggered when the potential victims lower their current altitude, a condition that applies even to individual limbs, forcing them to either stay immobile or go upwards.

The current way to obtain this stand is unknown, as not much information has been given.

Green Day is a humanoid Stand with dark lines over its body and cylinders on its head, which are constantly releasing a fog like smoke.

Befitting its name, Green Day is colored green in all media featuring it. 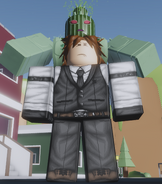