A Bizarre Day (Roblox) Wiki
Register
Don't have an account?
Sign In
Advertisement
in: Locations, Reworked, Landmarks,
and 2 more

Bob
Grassy Bay was located in one of the old map's corners, besides Tom's Shack. In a map update, this location replaced the Quiet Lake on the old map.

Grassy Bay was next to Tom's Shack and a few blocks away from the Bulldozer, and was covered with little ground with trees, stones, and mud piles surrounding it. Near the lake, there was a rock, in which the NPC Bob was leaning on it while fishing in the lake.

From a farther distance, you can see that there are four paper boats that are black on the coast of the New Map. There are also four boats that will pass by the lake.

A view of the Grassy Bay.

A Made in Heaven user standing menacingly on the paper boat.

A Made in Heaven user standing on the scientist's raft. 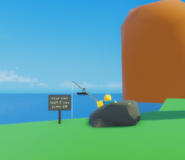 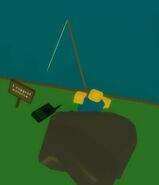 A picture of a radio that suddenly appeared in the Grassy Bay.
Community content is available under CC-BY-SA unless otherwise noted.
Advertisement