The design of Ruby Golden Experience Requiem is fairly simple, with a overall red design with models that make it look like a ruby model.

This stand and its user are able to see through time-space related functions, such as Time Erase and can act within it. This does not include stopped time.

Gold Experience Requiem unleashes a flurry of devastating punches against the opponent. Its power and speed increase significantly upon transforming into its Requiem form.

Gold Experience Requiem strikes the opponent with an incredibly powerful punch. On contact, it dazes the target, making them unable to attack.

Gold Experience Requiem pulls out a stone, then flicks it at the enemy. Upon contact, the opponent is initially dealt a great amount of damage. The stone transforms into a scorpion, which poisons the enemy for a good amount of health.

Gold Experience Requiem restores a great amount of life to the player in front of you. This can be used to keep your allies in battle for a much longer amount of time.

Gold Experience Requiem glides in front of the user, rotates around so that they are facing them, and heals the user with its left arm, healing a great amount.

Gold Experience Requiem and its user transition into a defensive stance. While active, mostly every attack is negated. In addition, all time-type moves, such as Timestop and Time Erasure will be canceled.

Note: Although it can completely negate almost every attack and in turn, damage the offender, Over Heaven stands and GER itself can still damage you without any consequence while you are using this.White Snake can also attack with its acid spit and disc. (Sometimes it might glitch, meaning that no matter how many times someone stops time, it will never stop, and you last more than 30 seconds.)

Gold Experience Requiem uses its legs to blast itself and the user forward. Unlike normal stand jumps, this has lower vertical height, but much larger horizontal distance. 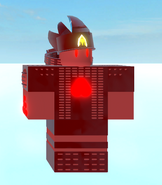 Ruby Gold Experience Requiem.
Add a photo to this gallery
Retrieved from "https://a-bizarre-day-roblox.fandom.com/wiki/Gold_Experience_Requiem_(Ruby)?oldid=506940"
Community content is available under CC-BY-SA unless otherwise noted.