watch 03:41
Wiki Targeted (Games)
Do you like this video?
Play Sound

30% of damage
Gold Experience is the Stand belonging to Giorno Giovanna, the main protagonist of JoJo's Bizarre Adventure: Vento Aureo.

This Stand is a part of the Arrow Stand Pool, in which it has a 1.4% chance (B-Tier percentage) of obtaining from a Stand Arrow. As for its shiny, there is a 0.14% chance (S+ Tier percentage) of obtaining it. Gold Experience can be alternatively obtained by using a Bizarre Arrow. Cracked Gold Experience can also be alternatively obtained by using a Shiny Arrow.

You can also use the Requiem Arrow to unlock the requiem ability of this Stand. By pressing the B button after activating requiem, you will transform into Gold Experience Requiem.

Gold Experience is a humanoid Stand of a slender build and average height. The top of its head has a similar shape to that of a typical soldier's helmet. It is also seen having large ladybugs shaped objects all over Gold experiences body.

The designs of these ladybugs are based on the Scarab Beetle, as a symbol of creation in ancient Egypt, symbolizing regeneration, these ladybugs symbolizes the abilities of Gold Experience. Befitting the Stand's name, it is portrayed in most media featuring it in a shade of yellow, but changing colors for some of its details, most notably its ladybugs' ornaments and eyes.

Gold Experience is a close-ranged Stand that excels in outstanding high damage along with high healing. As long as the user has a little bit of patience and strategy, Gold Experience can be a deadly versatile opponent and excels as few others do. It's great as a punisher should the enemy get to close, but it'll only be flexible should you watch your cooldowns and health. Gold Experience is easily overcome by Stands with greater damage output and speed. You must have good game-sense and be able to tell when to approach and when to retreat for a quick heal and cooldown reset.

The main move you'll be using is the R, Prohibiting Muda Blow. It has a short cooldown, does decent damage, makes them slow, it has a decent range, etc. This will be your main punisher, but you need to have a good sense of timing or else it'll miss. It also lines up other moves well, such as 7 Second Muda and MUDA Barrage. Something equally important is your V + Y, Life Restoration. As long as you manage it well, you can keep the battle going in your favor for as long as you want with its fantastic healing prowess. In-case if your enemy is trying to run, you can use the Life Creation: Piranha move which slows down the opponent.

A Player being attacked by a GE (Notice how the screen contrast gets higher and the walkspeed gets lower).

Requiem Transformation.
Add a photo to this gallery 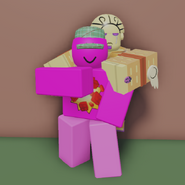 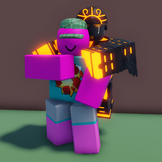 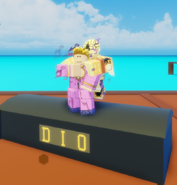 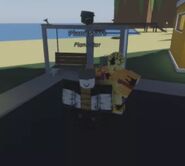 CGE'S Idle pose.
Add a photo to this gallery

Gold Experience as seen in the anime. 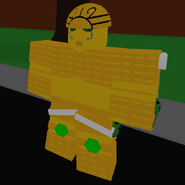 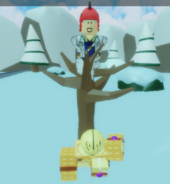 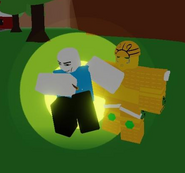 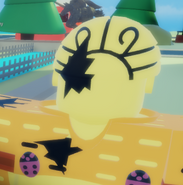 CGE before the final part of GE/GER rework.
Add a photo to this gallery

"I told you not to make me say the same thing."

"I Giorno Giovanna, have a dream"

Retrieved from "https://a-bizarre-day-roblox.fandom.com/wiki/Gold_Experience?oldid=630493"
Community content is available under CC-BY-SA unless otherwise noted.