Gangs was a feature added on 7/17/2020. This new feature allows users to join groups pre-made by staff members to have wars and PVP battles. To join a gang, search up the gang name on ROBLOX and after that simply join the group.

Gangs currently cannot be created by regular members of the ABD community. For now, Gangs are only created/administered by Staff Members From ABD.

When you join a gang group, you will get a badge on top of your player model once you join a game. This badge will show, in order, which group you are in, your rank in the group and a logo.

In-game, a base is a location that can be claimed. When a base is unclaimed, there will be a red force-field around it With a text above the base saying "Unclaimed Base". Bases cannot be claimed in VIP servers.

To Claim a Base, it requires 4 to 5 members of the same gang to claim one. The base will be claimed by another gang once there are 4 different members inside the base.

While a Base is claimed, it will generate a total of £5.000, each 5 minute a member of the gang that claimed the base will get £250, this reward is only given to members that are present in the server the base is claimed. 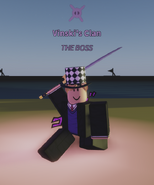 "Vinski's Clan"
Add a photo to this gallery
Retrieved from "https://a-bizarre-day-roblox.fandom.com/wiki/Gangs?oldid=605079"
Community content is available under CC-BY-SA unless otherwise noted.