Behind the Waterfall Room

Players
The Gang Lounge, previously called the Lounge Room, is a small room accessed through a door in the Waterfall Room.

The Gang Lounge was created for the purpose of being a place to relax. Just like Joestar Mansion, this place has no impact on the game.

Gang Lounge is a wide room with sets of comfortable chairs and tables followed by a red carpet in the middle. On one of the walls, there is a gallery of nostalgic pictures from A Bizarre Day, next to it there is a table with Gang owners, such as Speartaro and POT_DOG.

The Gang Lounge also contains some Japanese decoratives. Such as Katanas from the A Bizarre Dojo and paintings.

The lounge seen from a back corner. 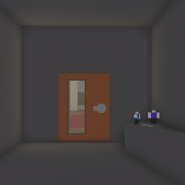 The entrance to the lounge.

The figure stand in higher detail.

The nostalgic wall in higher detail.
Community content is available under CC-BY-SA unless otherwise noted.
Advertisement