A Bizarre Day (Roblox) Wiki
Register
Don't have an account?
Sign In
Advertisement
in: Items, Semi-Canonical, Stand Items,
and 2 more

Evolves a stand/Gives an ability (Hamon and Joseph Hamon)

Free (spawns)
The Frog is a small, green creature with black eyes that can be found in different spawn points in the ABD map. It is easy to overlook due to its tiny size, so be on the lookout when finding this item. It can be well seen in the Spawnpoints around the map.

This item can be used to develop different abilities, specifically evolving into King Crimson. When used with Doppio's King Crimson, it will transform it into a more powerful version, giving it access to both of King Crimson's arms.

By using a frog, you will receive Hamon, an easy to find but strong ability. This ability is similar to the energy that is produced by the sun (7/8 chance).

You have 1/8 chance to get Joseph Hamon if you use a Frog on Standless.

Using a frog on KC(D) will grant you Two Arm Doppio King Crimson, an "uncompleted" version of King Crimson.

King Crimson or Full Body King Crimson is the completed version of KC after using 2 frogs on KC(D). A strong but hard to fully control ability. There's a 1% chance of you getting Manga King Crimson, KC's shiny. There're no changes to their abilities, just the voice lines and appearances are different from each other.

A Player using a Frog:

Frog being held by a player.

A more in-depth/zoomed-in look of the frog. 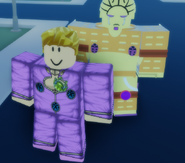 A frog is used on Gold Experience's counter move. 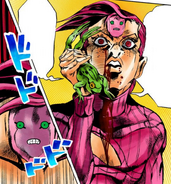 Vinegar Doppio calling with a frog in the Manga.

Will A. Zeppeli punching a frog to demonstrate Hamon.

Giorno Giovanna using a frog as a shield from Leaky Eye Luca.
Community content is available under CC-BY-SA unless otherwise noted.
Advertisement