A Bizarre Day (Roblox) Wiki
Register
Don't have an account?
Sign In
Advertisement
in: Specs, Non-Canon Specs, Unobtainable,
and 4 more

Fist of The Pot Star

Fist of The Pot Star

1350 HP
Fist of the Pot Star is an Admin-only Spec. Meaning that only Admin+ Members of the A Bizarre Day Community can have access to it. Because of the fact that it is a Admin only ability, players find this Spec very overpowered and hard to defeat.

Fist of The Pot Star shares a lot of voicelines and references from Kenshiro. It is based on the widely popular Shōnen manga and anime series, Fist of the North Star (Hokuto no Ken). Hence its origin.

Fist of the Pot Star takes form of a robotic and black glove with neon red brass knuckles that covers the user's hand. Its most distinctive aspect are the red, blue, green and yellow gems.

Fist of the Pot Star also shows a lot of visual effects from its moveset. For example, Headbutt (Q) has a yellow, pink and red hit effect that can show up if you execute the ability correctly. The Teleport move (C) also has a very distinctive visual effect. It takes form of a yellow and white beam that appears behind the user after using the ability. 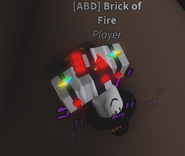 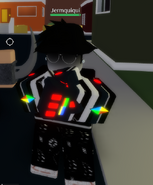 A closer look to FOTPS's gloves. 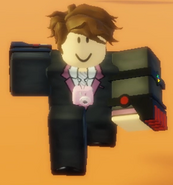