Next to Island De Bizarre

N/A
The Fishing Shack is a small building that can be found on an island next to "Island De Bizarre", the main island.

It is one of the hidden locations that was added to the update 2.0.7a map. However, the main purpose/existence of this location is currently unknown.

The shack is surrounded by trees and bushes, as well as an empty billboard and 4 park table benches. The building is located on a small island next to the main island. The shack is particularly small and is a rectangular building of short length but long width. There are also transparent glass windows surrounding the shack-like building.

Inside the shack, several fishing-related objects can be found, including fishing rods of different colors, and what appears to be a fish on a shelf on one wall. This shelf used to contain small ball-shaped sinkers but as of 3.0.2i, they have been replaced by the fish. There is also a Boombox on the counter that plays music along with the fishing rods.

Behind the counter is a sheet of paper with Morse Code, that, when translated, spells out "BACK IN BUSINESS". There are 3 fishing boats in the water by the shore, and 3 more propped up against the front end of the building. Underneath one of these boats is a severed eyeball. The previous owner of the eyeball is unknown.

The counter of the shack.

The boats resting on the shack. Notice the eye underneath the right boat. 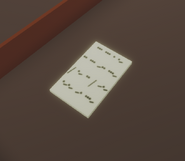 The morse code paper behind the counter. 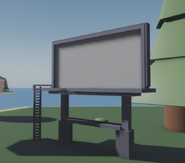 The strange empty billboard outside of the shack.

A picture of the shelves on one side of the shack.

An exterior look of the shack.

A counter located inside of the shack.
Community content is available under CC-BY-SA unless otherwise noted.
Advertisement