Enough to not float down, hover, slam to the ground, or fly

The Holodummy was last seen during the 2020 Halloween Event, standing in front of a tree near the hotdog stand while costumed as the Ghostly Dummy. After the event ended, the Enhanced Holodummy was removed from the main island and is now only seen in D4C's Dimension.

The Enhanced Holodummy is a white, transparent training dummy presumably formed out of forcefield technology. It has no headgear or unique clothing, but it does have a very happy face which has some weird stuff going on because of the transparent effect.

During Halloween 2020, the dummy turned a shade of green and renamed itself as the Ghostly Dummy. 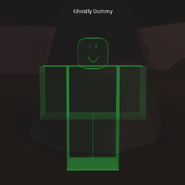 The Ghostly Dummy as seen during Halloween 2020.
Community content is available under CC-BY-SA unless otherwise noted.
Advertisement