E
Ender Crimson was a non canon shiny variant of King Crimson. Because of the fact that this is a shiny version, this stand shared the same moveset from King Crimson.

Ender Crimson's origin comes from a hostile mob from Minecraft named 'Enderman' and it shares a lot of references from it. For example, this Stand makes an Enderman noise after the end of its time erase and the voice clips are random things an Enderman can say.

Ender Crimson could be obtained by using an Ender Pearl (an old version of the Monochromatic Sphere) on King Crimson.

In appearance, Ender Crimson is similar to King Crimson. The Stand takes form of an entirely black Stand with pieces of armor that are also black. The Stands eyes are glowing blueish-purple and it has an epitaph face on its forehead.

Ender Crimson has blueish-purple hit effects, different from normal King Crimson which has red hit effects. When you activate epitaph (T), the users eyes will flash blue, differently from its counterpart that flashes red. 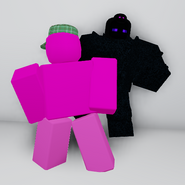 Ender Crimson and its user posing.

New Ender Crimson model shown on 9/21/2020 (MM/DD/YY)
Add a photo to this gallery
Retrieved from "https://a-bizarre-day-roblox.fandom.com/wiki/Ender_Crimson?oldid=629612"
Community content is available under CC-BY-SA unless otherwise noted.