"Did you forget that I gave you a portion of my King Crimson's power?" - Diavolo to Doppio (Diaboro kara su Doppio, ディアボロから酢ドッピオ)

Black
The Dummytaph is a training dummy and stand user who wields the sub-stand of King Crimson, Epitaph.

The Dummytaph has white skin and black trousers, with a persimmon torso color. Much like most other dummies, it displays only a cold stare on its face, with no other expressions. It does, however, have an Epitaph on its forehead, which has the same stare as the Dummytaph itself.

Dummytaph in the Easter event. 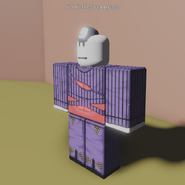 Dummytaph during Halloween 2020.
Community content is available under CC-BY-SA unless otherwise noted.
Advertisement