Next to the Colosseum

Nameless Dummy
Tim's Juice Worker
The Dummy Grass Island was a small secret island located far from the main island. Its purpose for the game was unknown. Because of its distance from the main island, getting there proved to be a very difficult task.

The Dummy Grass Island was an entirely green island with a house and a sign. The sign's label was slightly askew and said "The Dummy Grass Island???". Inside of the house were 2 grey dummies, Tim's Juice Worker and a nameless dummy. It was located next to the Colosseum. 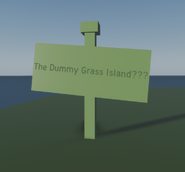 The inside of the house.

The Dummy Grass Island during the Halloween Event.
Add a photo to this gallery
Retrieved from "https://a-bizarre-day-roblox.fandom.com/wiki/Dummy_Grass_Island?oldid=625626"
Community content is available under CC-BY-SA unless otherwise noted.