D4C is among the most powerful Stands in the series. In its default form, D4C is a close-range Stand with above-average strength and speed. One of D4C's main abilities is that it allows different parallel worlds/dimensions to co-exist at the same time and/or in the same place. It also allows its user to visit these parallel worlds/dimensions and interact with entities in the alternate universe.

This Stand is a part of the Arrow Stand Pool, in which it has a 0.4% chance (S-Tier percentage) of obtaining from a Stand Arrow. As for the Stand's evolution, when a Holy Corpse is used, the Stand with turn into an evolved form of itself: D4C: Love Train. Furthermore, D4C's ability to teleport to the D4C Dimension is mandatory if you want to obtain One More Time.

D4C has a humanoid form with large, upright horns that somewhat resemble the ears of a leporid; a masked mandible, and a light body lined by an almost unbroken seam or trim.

It's designed after the image of leather being stitched together, like on a baseball. Under its brow, its eyes appear to emote a cold gaze. It's eyes also seem to have a patch inside it.

D4C is baby blue and pink, however, not in all media featuring it, since in a promotional video it was actually a more strong blue and red, which are supposed to represent the U.S.A flag.

The player uses the full potential of the Holy Corpse to obtain D4C: Love Train.

D4C is a very powerful Stand if used correctly, as this Stand can be used effectively to fight just about any Stand or Spec. When D4C is waving its flag, it becomes almost invincible while the animation plays out; D4C still takes damage, but so little it's won't matter. This gives you lots of forgiveness incase you use a flag move in a bad position. Do keep in mind that moves that can block-break such as The Hand's attacks, Killer Queen's bombs, Made in Heaven's throat slice, etc. can still damage you, Technicalities: D4C's R slap attack can perform GODLY damage, and can easily slice the health pools of many powerful Stands such as Gold Experience Requiem, and Specs such as Kars in half in a single successful connection. The downside is that the attack is 2 slaps in succession; while the first slap often connects, the 2nd slap is a considerable distance away from D4C. However, this can have its advantages and disadvantages. The pro is that the slap can easily connect with runners, and ragdoll them for more attacks, and just has more general range. The con is that it's difficult to line up your opponent's ragdoll to hit them again with the slap, though this may get easier the more you practice it. Along with the slap, D4C's B move lets the user create up to three clones. This can prove very useful against a Stand or Spec to overwhelm them, however, it is easy for the clones to diverge from the intended target and attack unwanted people. Another clone move, H, allows the user to create a bomb clone of the enemy. This can be very useful for starting fights, however even in the middle of a fight can be handy in a pinch due to the high damage it does. Beware that the animation is slow though, and even though D4C has a lot of invulnerability, particularly powerful Stands or Specs can freely attack you while you're unable to fight back.

D4C's kick attack is useful for starting combos since it can slow opponents down and occasionally blinds them as well. One thing that should be mentioned: All of D4C's attacks actually happen a significant distance away from the user compared to other Stands, meaning if an opponent is too close, a few of its attacks WILL NOT connect, making you vulnerable at a very close range.

Next up is the F Move: Alternate Dimension. This move is often requested by other players to be performed, as it transports you and anyone else in close proximity to the old map (as it may feel nostalgic for longtime ABD players). In combat, this can be very useful for dragging a player into a situation where they can't be protected by other players, forcing them into a 1 v 1 with you, and you get a considerable speed boost to boot. While in the dimension, you always spawn on the tree in the Eastern area of the map, giving you a birds-eye view of the players you've brought with you. The players ALWAYS spawn either behind the houses, behind the tree you spawn on, directly in front of you, at the far end of the map where the section of housing ends, and ON top of the section of housing to your left. Use this information to always get the first strike on them, and you can use the speed boost afforded to you.

Note: The F attack doesn't need the flag to actually land on the players you're teleporting, they just need to be in close proximity while you start the animation. Whether they run or not, it doesn't matter. They will still teleport there with you.

The V move can be useful since the clones will attack people, who will quickly realize they're mindless clones who don't have any substantial attacks. You can quickly transfer to one and get the drop on them, however, a particularly smart enemy may not be fooled by it. Regardless, this ability can be good for an escape or for flanking the enemy.

The T revolver does decent damage, and as the description above says, it's very spammable. The revolver has a fairly long range, which is perfect for sniping enemies from afar, whether because they won't get into D4C's range, or you simply want to start a fight without getting up close. Aiming can be a bit tricky, however, it is easy to get a grasp of where the bullet might go.

The user using "Merely Self Defense". 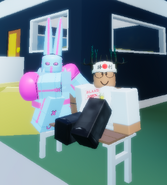