A Bizarre Day (Roblox) Wiki
Register
Don't have an account?
Sign In
Advertisement
in: NPCs, Bosses, Characters,
and 3 more

"Rework your strategy all you want. There is a limit to what you humans can do." - Dio Brando (Dio Burandō, ディオ・ブランド)

2 minutes
Dio Brando is the main antagonist of JoJo's Bizarre Adventure: Phantom Blood. He is a neutral vampiric NPC that can be found in the Joestar Mansion. However, when attacked, he will become hostile and attack the player(s).

When killed, he either drops 3 Banknotes or a Vampire Mask.

This NPC resembles Dio Brando from part 1 of JoJo's Bizarre Adventure: Phantom Blood. His outfit also uses that of those of Phantom Blood.

Dio Brando has 1750 HP, and spawns along with 2 Vampiric Minions with almost the same movesets and 300 health. 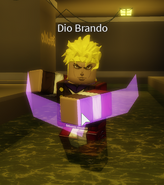 Dio Brando with a Vampiric Minion. 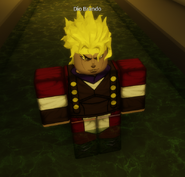