"What you can find beyond the powers of my Stand is where you need to go in order to find Heaven. "-DIO (DIO, ディオ)

Evolves some types of Stands.

N/A (Kill the DIO Boss or dig to obtain)
DIO's Diary is a personal diary written by DIO himself, containing vague but several different details of the goals and paths that need to be achieved in order to attain, "Heaven". Such as remembering phrases, where to go, and the New Moon. Only those worthy may ascend (Enrico Pucci is one example). The diary was first shown in Jojos Bizzare Adveture Stardust Crusaiders when jotaro was reading and burning it and was also the basis of the light novel Over Heaven by Nisio Isina. It was used by Pucci to follow the steps of a deceased DIO and attaining heaven in order to avenge and achieve DIO's goals.

The diary looks like a regular, old-fashioned diary with small gold highlights on the cover and back. On the cover, the name, "DIO", is engraved just below the center.

When Dio's Diary is used on C-Moon it will transform into Made In Heaven.

When used with The World / Retro The World they will transform into their Over Heaven counterparts (TW= TWOH, RTW= RTWOH), which grants several buffs and the ability to overwrite reality. Diary can be also used on its vampiric form, but it's considered as /Retro The World (Over Heaven)a downgrade. 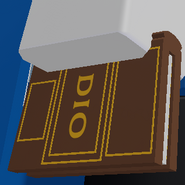 A closer look at DIO's Diary while holding. 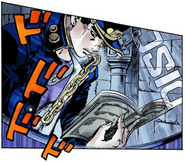 A pile of DIO's Diaries back when it used to spawn.

DIO'S Diary in the bank. 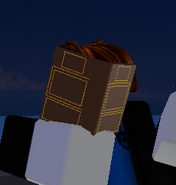 The book appearing on the player's hand while using STW's H move.
Add a photo to this gallery

Retrieved from "https://a-bizarre-day-roblox.fandom.com/wiki/DIO%27s_Diary?oldid=464825"
Community content is available under CC-BY-SA unless otherwise noted.