A Bizarre Day (Roblox) Wiki
Register
Don't have an account?
Sign In
Advertisement
in: Locations, Landmarks, New Map,
and 2 more

"A coffin marked with the letters D-I-O... I wonder what could be inside?" - Treasure Hunters (Torejāhantā, トレジャーハンター)

Around the A Bizarre Park

DIO
DIO's Coffin is the spawn point of the NPC DIO, who spawns near here every 60 minutes, adding a 1-minute delay each spawn.

DIO's Coffin can be found around the A Bizarre Park, near one of the wood cabins.

In appearance, DIO's Coffin is made out of wood with a golden plate. Written on it DIO. Over the plate, there is a door lock made out of gold.

In addition to that, there are particles coming out of it, such as a mysterious purple fog, and from the center of it, there are menacing (ゴゴゴゴ) particles on the front of the coffin, just like the Menacing Dummy. 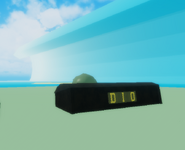 The old Model for DIO's Coffin. 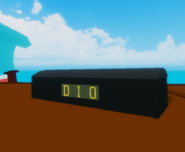 DIO's Coffin on the Boardwalk at the Bizarre Park.

Dio's Coffin in the First Hours on the New Map update.

The new model for DIO's Coffin.

Tom's Tinpot on the corner of DIO's coffin

DIO's Coffin in the Halloween 2020 event.

DIO's coffin at the beginning of Stardust Crusaders.

Close up of DIO's coffin in Stardust Crusaders.
Community content is available under CC-BY-SA unless otherwise noted.
Advertisement