A Bizarre Day (Roblox) Wiki
Register
Don't have an account?
Sign In
Advertisement
in: Bosses, NPCs, Characters,
and 4 more

"Oh? You're approaching me? Instead of running away, you're coming right to me?" - DIO Part 3 (DlO, ディオ)

2 minutes; +5 seconds for each player on the server
DIO is the main antagonist of JoJo's Bizarre Adventure: Stardust Crusaders. He is a Vampire who wields a stronger version of the stand The World and acts as an NPC boss in the game.

He spawns at the Coffin. DIO is the strongest boss in the game currently, having a large health pool and dealing more damage and more moves than other bosses. Unlike Dio Brando, DIO is not able to regenerate his health.

DIO wears a yellow jacket and trousers of the same color. He also has a belt wrapped around his waist with a green heart on it, as well as slings attached slightly below his belt.

Underneath his jacket, he wears a coal-black tank-top. DIO's hair is long and of bright blonde color and is held up by a green headband with a heart in the center of it. 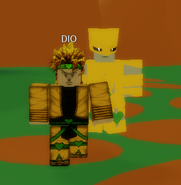 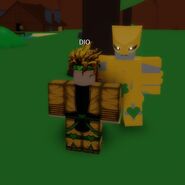 DIO, as seen in the 1993 OVA of Stardust Crusaders.

DIO, as seen in the Stardust Crusaders Anime.

DIO's "High" Form in the Anime.