As an evolved version of D4C, Love Train is an overwhelmingly powerful Stand, with its main ability being to direct or reflect the damage of certain abilities or movesets back to the opponent. This Stand also includes some of the original form's ability, as it still has the ability to fire a projectile and summon clones.

D4C: Love Train can be obtained by using a Holy Corpse on D4C.

Similar to D4C, it possesses similar traits in terms of appearance. It still has its long horns, with the only difference being that it is missing its left one. There are pink stitches covering its entire sidearm, eyes, and legs. The X's on its legs and knees are still present.

The main difference of D4C: Love Train is its cracked feature, as simply said, it is just D4C but it has a lot of broken/missing parts, similar to Cracked Gold Experience. Some of the broken parts include one of its horns and left arm. Unlike D4C, it also has a gear-shaped pallet sticking out of its back and chest, with pink stitches on the inner part of the gear. Half its face is also destroyed.

D4C: Love Train also consists of the main color scheme of pink and light blue, similar to D4C. However, Love Train also has some differences in terms of its colors, with its chest gear having glowing/neon pink stitches on its chest and its eyes. When idle, the Stand will have a bright orange aura to it, similar to the color of Love Train. When the user walks, it will leave behind a trail of effects that have similar appearances to the Love Train ability. Unlike the user, it's clones will not have the trail effect.

D4C: Love Train is among one of the most powerful Stands in the game and unlike other powerful Stands, is relatively easier to learn and master. Despite being described as a combo Stand with the likes of Stands such as King Crimson, there is little room for combos and as such should be treated as a raw damage Stand instead. Even with its nerfs, D4C: Love Train can prove to be a GODLY Stand.

The E and R moves are virtually identical with the exception of damage; the E move does 5 more damage than the R move. Regardless, both moves knock the target away at a considerable distance. This sort of move is useful against close-range high damage Stands such as Star Platinum (Over Heaven) or Gold Experience Requiem.

The T move (currently disabled) is normally used as a getaway or repositioning move, very similar to King Crimson's Time Erase but with a few key differences: the user cannot attack, activation is instant, and the ability lasts longer (15 seconds vs KC's 10).

The Y move is your best friend. It is essentially a free hit move dealing 30 damage no matter what, regardless if the target is blocking, using Epitaph, or even has Gold Experience's Frog Deflection active. What makes this move powerful is its homing ability, akin to Tusk ACT2's Homing Nail Bullets. The bullet however, will only target the closest target, so be sure that your intended target is closest to you if you're fighting near other people. Keep in mind that it has a considerably long cooldown, so time it wisely if you want to use it in between moves in order to keep pressure on your opponent.

The F move is arguably one of the best moves of D4C: Love Train. When active, it will protect you from almost all damage (some exceptions exist). However, it does not reflect damage unlike the old Love Train, so it's more for pure defense than anything. Another reason that makes Love Train a good move is the Z move; it changes the usual Stand jump for a more unique flag slide, similar to Tusk ACT4's nail glide, except it only lasts for three seconds. It's possible to combo both Z moves; you first Stand jump, then activate LT, then hold Z again. Oddly enough, Tusk ACT4 cannot get through Love Train.

The H move is a somewhat high risk high reward move, due to the relatively unpredictable hitbox. However, the clone hits right when you press H, not when the clone kicks. This information is vital, as it could be used as a surprise tool. It is also very good as a defensive tool when walking backwards, as it gives it more range.

The V move is essentially the same as STW's V move, being instant teleportation. This move is very good for appearing next or behind your target and immediately retaliating, and is to an extent spammable.

Your B clones are a great tool, and for good reason: they have ranged attacks. The clones fire one bullet approximately every second, so in a 1v1 they can be your trump card. However the bullet hitboxes are bugged, so the rounds may not always hit. It is also advisable to use your clones only when you are alone, as the clones will target the closest person instead of your enemy. 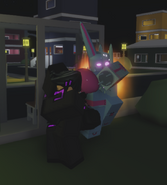 The pose for D4C: Love Train.

The trail effect that D4C: Love Train has.

What D4C: Love Train's T move looks like for the opponent. 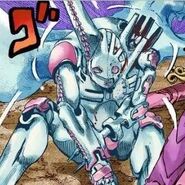 Cracked D4C as seen in the manga.