"My heart and actions are utterly unclouded. They are all those of 'Justice'." - Funny Valentine (Fanī Varentain, ファニー・ヴァレンタイン)

Fake Tom, Menacing Dummy, Enhanced Holodummy, Dummytaph
D4C's Dimension is a place where you can get to using D4C's ability "Dimensional Hop", which is an ability that teleports everyone close to D4C and the user itself to his dimension for 25 seconds.

Once the user returns to the original universe, their location there is based on their last location in the alternate universe. This mechanic often ends with players falling through the floor and into the void.

D4C's dimension represents a small town surrounded by mountains, with a small area next to it resembling a 1v1 arena. Beneath and around D4C's Dimension are the Computer Room, Nado's Secret Room, Blacksmith Store, News Studio, Secret Room, and Santana's Room. It closely resembles the map seen in earlier versions of ABD.

These are locations that are present in this Special Location but they deserve their own spot. There is not much to do in these places since you have a few seconds to return to the original location you were.

Below are the specific sub-locations that are located inside this park. For simplicity's sake, not every building or trash can is listed.

The Park in the center of A Bizarre City. It contains 2 Menacing Dummies, a single Enhanced Holodummy, as well as a fountain in the middle, there are 8 bushes with no collision, giving the opportunity to hide on them. The Park is also where D4C and the User spawns after using the Dimensional Hop Ability. It also contains the Fake Shop, listed below.

In previous versions, the park had an Angelo Stone with Mr. President's shell beside it.

The Fake Shop is located on The Park and it's owned by a Fake Version of Tom, also known as "Fake Tom", you can't interact with "Fake Tom" which makes it not an NPC. In the "Tent" there is a Boombox that doesn't play music and a Bloxy Cola spider, which is a promo code item for your avatar. The tent is identical to A Bizarre Shop, save for a blue light instead of a white one. Similarly, Fake Tom is identical to Tom, save for zero animations and a lack of buyable products.

Despite the radio playing no music whatsoever, it still grows and shrinks like Tim's does. It's possible that Fake Tom's radio pulsates to the beat of Tim's radio's music, although this is not tested.

The Buildings consist of 9 total building each one of them with different colors to extinguish each other. Each building has 3 floors and they all have a staircase on the entrance. On top of the buildings, there is nothing important besides some pipes and a "triangle", There is nothing inside these buildings except for stairs.

The Neighborhood consist of 14 small houses that have only 1 floor, unlike The Buildings, the houses don't have a staircase on the entrance. The House has nothing inside. The houses have different colors to extinguish them from other houses, there are 2 houses which floors are different from others, these houses are separated from the other group of houses.

A small, simple Shed located in between the 2 houses, this Shed is for Tornado (ABD owner). The walls are made out of Wood Planks, the roof is made out of Bricks and the floor is made out of Soil. Although it's too small to enter, you can press C to roll in.

In previous versions, the shed was located on the opposite side of the Mountain Campfire on the mountains and was named "Jericho's Little Girl Shed". This was likely changed to avoid complications with ROBLOX guidelines.

D4C's 1v1 Arena is an Arena on the D4C dimension that looks like a soccer field. It is very similar to the Soccer Field (1v1 Arena) and serves the same purpose.

In previous versions, there was a sign pointing at the arena that said "D4C's Arena".

Beside Tornado's Shed is a tall wooden billboard. On it are four pictures of old versions of ABD. By approaching it then using an arrow, you have a 1% chance of obtaining One More Time.

The Duck is on top of a Purple Building, the Duck itself is an Epic Duck which was a duck that appeared on ROBLOX for a short time to celebrate April Fools' Day in 2009.

This easter egg is located on the Blue Building which is the last building to the Left. There is a Decal of Kirby in a brick. There is no context to this Easter Egg, making it quite odd.

Currently, the location of Kirby is unknown. 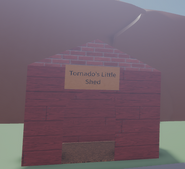 The Duck on Top of the Building. 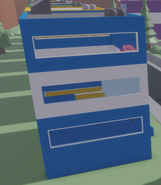 Inside the left House.

The rubber duck.
Community content is available under CC-BY-SA unless otherwise noted.
Advertisement