"My mouth is a portal into a dark dimension. Even I ignore where it leads. I sent your friend in here... and you are next." -Vanilla Ice (ヴァニラ・アイス Vanira Aisu)

C
Cream is the Stand of Vanilla Ice, featured in Part 3, Stardust Crusaders. Its main ability is to become a spherical void of nothingness that obliterates everything in its path.

Cream is a fairly powerful short-ranged Stand, able to decapitate someone with a single chop. However, its true power lies in its unique void ability.

The current way to obtain this Stand is unknown, as not much information has been given.

Cream appears as an exceptionally tall, skull-faced humanoid Stand with a mask of similar character to an executioner's cowl. Two horns that are sticking out of its head are also visible on the mask, like Atum and The World, has heart-shaped decorations on its body. When using its main ability, Cream takes the form of a moving sphere of nothingness that can cut its way through any solid object it passes through. This second form is actually a void made by Cream eating itself and Vanilla Ice.

In both the colored manga and anime, as well as video game adaptations, Cream has a white body with a dark blue cowl and yellow eyes. In the OVA, Cream has a dark green cowl.

Cream's design is based on images of executioners and Death (personification), notably the concept of medieval French executioners. 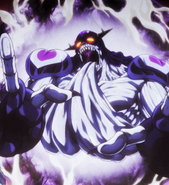 Cream as seen in the anime. 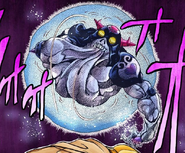 Cream as seen in the manga.
Community content is available under CC-BY-SA unless otherwise noted.
Advertisement