A Bizarre Day (Roblox) Wiki
Register
Don't have an account?
Sign In
Advertisement
in: Items, Stand Items, Semi-Canonical,
and 2 more

"DIO! He has consistently shown up in all of my spirit photos!" - Joseph Joestar using his Stand, Hermit Purple on a camera (Josefu Jōsutā, ジョセフ・ジョースター)

N/A
The Camera is an item that has a small chance to drop when you kill DIO. The camera can be used to evolve Vampiric The World into Shadow The World.

The camera has a simple design, it is just a normal design model of a camera mesh. Its colors are grey and black.

A Player holding a Camera.

Camera inside a player's old bank. 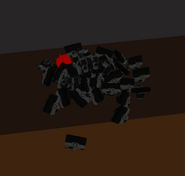 A pile of cameras when they used to spawn.

A Camera being held in the old game. 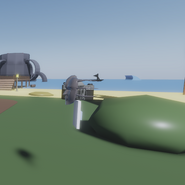 Camera when dropped by DIO.
Community content is available under CC-BY-SA unless otherwise noted.
Advertisement