"Within my body and my spirit, gravity exists...!" -Enrico Pucci (Enriko Putchi, エンリコ・プッチ)

65% of damage
C-Moon is the second evolved Stand that Enrico Pucci obtains in JoJo's Bizarre Adventure: Stone Ocean while on his path to obtaining Heaven.

C-Moon is a particularly dangerous Stand to encounter. It has very powerful attacks, and some attacks hit a second time due to its main power, controlling gravity around the user. This power can also be used to provide the user with very high mobility in comparison to other Stands. This Stand can easily take on any ability in the game, provided the user can use it well. This Stand also has a shiny variant of itself: Grape Moon.

C-Moon is a humanoid Stand. As a result of the Green Baby fusing with Pucci and his Stand, Whitesnake, it bears similarities to both, giving its appearance a sense of fusion between the two.

Its face is skeletal, bearing elements of the Green Baby's appearance: Completely red eyes with thick, spiked eyelashes, and vein-like textures and patterns on its face. It has Whitesnake's striped lines on its hips, chest, and on the top and crown of its head.

The top of its head is faintly similar to Whitesnake's crown. The back and sides of its head along with a belt incorporating a long, arrow-tipped tail possess a fur-like texture. On a thin waist, it has overt abdominal musculature and is generally believed to have inherited Whitesnake's figure. All media featuring C-Moon portray it as white and green.

As for its Shiny, Grape Moon has a more violet tone instead of green. The inspiration for this Shiny comes from Jojo's Bizarre Adventure Eyes of Heaven.

The stand user thrusts up DIO's Diary into the air, and thus evolves C-Moon to its final form: Made in Heaven. A Stand with incredible speed and the ability to accelerate Time. However, the Diary also has a small chance to grant the user a shiny version of Made in Heaven, Made on Hallows Eve.

As mentioned previously, the Made in Heaven has a shiny version of it self. After using a DIO's Diary on a C-Moon, the player has a small chance (5% with regular C-Moon. 20% with Shiny C-Moon) of getting Made on Hallows Eve.

Every 10 minutes, a white beam has a 20% chance to appear randomly on the map. Walking into the beam with Shiny C-Moon has a 1/3 chance to reward the user with Made in Galaxy; otherwise, the user's Stand is reverted back to Whitesnake.

Note: This evolution only works with Shiny C-Moon. Regular C-Moon has no way of evolving to Made in Galaxy.

This is one of Pucci's evolved Stands which you obtain by using a Diary on Whitesnake. This is a great combat-oriented Stand, it can be used for close-range combat, it has decent speed and extremely high knockback with different gravity negating skills. Many of its moves drastically improve mid-air movement ability and it's an incredibly powerful close-range only Stand that is rewarding when mastered.

You are going to use your R move many times since it does a huge 60 damage if it hits, however it will deal 35 damage first, then give the remaining 25 after a few seconds. The move also does an impressive amount of knockback, preventing you getting into someone's range before the second hit is made.

Localized Time Acceleration (T) is important when trying to make an attack while landing and being defensive at the same time, use it to temporarily run away and plan your next move.

Heart inversion (J) deals a total of 90 damage its a good starter if you can land it on your enemy since it does no knockback.

As mentioned above, C-Moon gets a wide range of dodge and evade attacks. Using your H combined with your R ability and right when the speed boost ends, use your F ability in order to deal a ton of damage to your enemies and then rush them with E move barrage while they're stunned. The H move also allows you to jump high easily enabling you to climb up rooftops of houses and then up to buildings. H has a very long animation but it's good for running away on the hot air balloons. It can also break the barriers of the map. 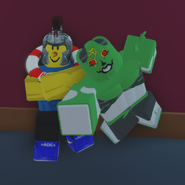 C-Moon and its user menacingly posing. 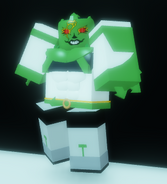 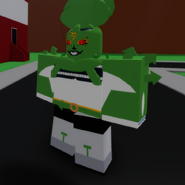 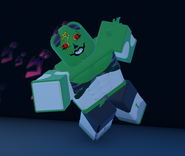 The inspiration for the shiny version of C-Moon.

A Player obtaining Made in Galaxy.