Near the Basketball Court

TheGuestToBlame
The Bulldozer is a tractor equipped with a substantial metal plate (known as a blade) used to push large quantities of soil, sand, rubble, stone or other such material during construction or conversion work and typically equipped at the rear with a claw-like device (known as a ripper) to loosen densely compacted materials. It is usually a crawler (continuous tracked) tractor. Inside the window, the owner of the game, TheGuestToBlame can be seen operating it.

The Bulldozer has a mostly yellow color-scheme and is shaped like a truck. The wheels, however, look like Continuous track, also known as the wheels of Tanks.

The Bulldozer in-game is also seen to be pushing dirt to create a path from the tunnel behind it to where it is now.

The Bulldozer used to be located behind a small red house and some trees between the 1v1 Arena (Basketball Court) and The Grassy Bay.

There was also a tunnel/cave behind the Bulldozer, where the Enhanced Holodummy used to reside. On the right side, Bob can be seen fishing in the Grassy Bay. A few buildings to the right of the Bulldozer is where Tom's Shack is located.

The original Bulldozer's back.

Inside view of the Bulldozer. 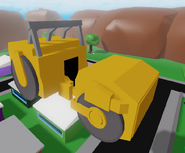 A picture of a Steamroller (Road Roller), similarly to the Bulldozer.
Add a photo to this gallery
Retrieved from "https://a-bizarre-day-roblox.fandom.com/wiki/Bulldozer?oldid=602873"
Community content is available under CC-BY-SA unless otherwise noted.