Assumed male
Bob, also known as the fishing Noob, is a sad NPC located in Grassy Bay. Near Tom's Shack.

In appearance, Bob has a blue torso, green legs and yellow arms and head. Similar to that of a “Noob”. In his hands, you can see a fishing rod. Probably purchased on the Fishing Rod Store In The Pier. You can also notice that he's faceless. But because his head is tilted. Everyone thinks that he's sad.

The old model for Bob. 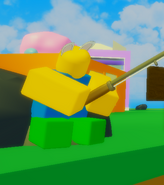 Bob in the Easter Event.
Community content is available under CC-BY-SA unless otherwise noted.
Advertisement