"My heart is burning with the heat of a raging fire! Feel the resonating beat of my pulse! SUNLIGHT YELLOW OVERDRIVE!" - Jonathan Joestar (Jonasan Jōsutā, ジョナサン・ジョースター )

60% of damage
Basic Hamon is a spec that was mainly featured in both JoJo's Bizarre Adventure: Phantom Blood and JoJo's Bizarre Adventure: Battle Tendency, in which it was used by several characters that were featured in the series. The moveset of Basic Hamon is mainly based and inspired off the character of Jonathan Joestar, the main protagonist of Phantom Blood.

This spec has a multitude of uses, allowing a wide variety of fighting styles and tactics. Vampires are naturally weak to this energy, but the Pillarmen have a resistance to it. This also applies in-game and works as a passive for the ability, as you will deal more or less damage to these other specs.

Just like most Specs, Basic Hamon does not have a physical appearance, only having visual effects when the user uses their abilities or movesets.

An example of this can be when Hamon Breathing (H) is used, a yellow-coloured aura can be seen forming and generating all over the player's body. Along with the aura, small yellow particles can also be seen alongside floating around the player.

This can be seen by anybody, including people who don't have stands. This applies to the Manga and Anime as well, since Basic Hamon can be seen by regular human beings.

Basic Hamon isn't the strongest ability and doesn't have the most options. However, it can be lethal even if your opponent knows how it works. You should be careful when fighting or using this spec. Hamonic Blade is a high damaging move with a good range and a short cooldown, making it your main damage output. To be able to win a fight, you must be able to use this attack at the right times while also not using it as soon as your cooldown finishes as chances are your opponent can predict it. The Hamonic Blade is also best used as a punisher, flinging your opponent away and dealing high damage.

This move is best used when your opponent is freaking out or when they go tunnel vision trying to kill you at low health. Zoom Punch is surprisingly useful to keep opponents at bay rather than bring them closer towards you. People will usually see this attack coming and fall back, so you can use this to scare people off. If it does land, you can combo into another attack, usually Hamonic Blade. Hamon infused leap is good for catching your opponent off guard and giving you the chance to do some damage, so don't think its just a tool for running. Consider using it at random times to try to attack or use it immediately after running away for the best effects. Its also useful for extending combos, though this is hard to do. Sunlight Yellow Overdrive is incredibly fast and shouldn't be ignored.

However, using this attack is a risk since unlike other barrages it doesn't have super armor so be careful. Use it from time to time to inflict a lot of damage quickly this has a big hitbox and a good damage output making it very useful against Bosses however you will inflict more damage to vampiric Bosses like Dio Brando or DIO. This is a great spec for beating vampires or VTW and STW. Scarlet Overdrive bypasses STW's counter so don't worry about STW teleporting behind you when using Scarlet Overdrive. Sendo Chop is extremely viable when your opponent is really close it has a high damage output.

When Hamon is fully charged you can 1 shot a STW if the Sendo Chop double hits but it has a chance to do it you can very rarely a triple hit with it making it a deadly combination against Stands/Specs that have almost the same durability as STW making it a deadly combo if used with F. This move can also be very useful when fighting Bosses because it has good damage output and not much knockback making it kind of easy to do a combo with it so don't worry about Bosses going away because of your knockback using Sendo Chop.

A good strategy for Basic Hamon is to hit-and-dodge. Because Basic Hamon can spam roll, you can easily dodge slow attacks. The key is to be very fast-paced in your moves. Never use Sunlight Yellow Overdrive to its maximum time. Use Scarlet Overdrive and Zoom Punch to fill the gaps between Hamonic Blade slices.

This is a good spec for fighting Dio Brando because of its Passive B. Best way to kill Dio Brando would be for you to get a friend with GER or SPOH and have them focus on Dio while you take out the minions.

Basic Hamon's attacks are extremely quick so you can punish people blindly attacking quite easily. Since your “stand leap“ is quick and sends you quite a bit forward, mobility shouldn't an issue for you allowing you to dodge or extend combos without much effort. If you want to charge your Hamon meter for a head start, block/pose to keep your energy. 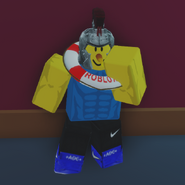 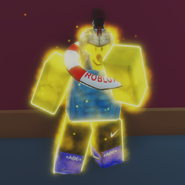 The old pose for Basic Hamon.