N/A (Manga Stats: B)
Ball Breaker is the stand used by Gyro Zeppeli, a deuteragonist featured in JoJo's Bizzare Adventure: Steel Ball Run. It is the manifestation of Spin energy. Ball Breaker is a small stand coming close to the size of a steel ball. It has 7 eyes and barely resembles a humanoid type of stand. Usually, it is surrounded by Spin energy.

Not much is known about Ball Breaker's abilities. It can bypass D4C's dimension wall. It most likely will be a stand that counters D4C. Ball Breaker can also age a person along with their stand as long as the person was touched by Ball Breaker or Gyro. 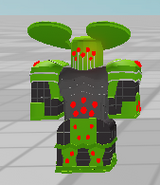 Ball Breaker in ASB /EoH.
Add a photo to this gallery
Retrieved from "https://a-bizarre-day-roblox.fandom.com/wiki/Ball_Breaker?oldid=621500"
Community content is available under CC-BY-SA unless otherwise noted.