Muhammad Avdol was a small ally in Stardust Crusaders and a Stand User that wields the fire manipulating Stand, Magician's Red.

This NPC/Feature has not been released yet. It was however, announced by a ABD developer.

Despite this, the information is old, therefore the status for this feature is unknown.

Avdol is a black male of above-average height and medium to heavy build. His main attire consists of a long overcoat or robe with wrist-length sleeves and a scarf around his neck.

He has two identical scars that run down his cheeks. He wears a headband or headscarf wrapped around his forehead.

He wears earrings comprised of a single, long chain of medallions, resembling a necklace. He wears a varying number of thick metallic bracelets on both of his wrists.

For example, the passives that will be added to Magician's Red in the future. More specifically, the "Environmental Knowledge" or "Elemental Stand", in which the stand is affected by the environment itself. An example can be how Magicians Red can create some deadly combinations with fire around the environment. 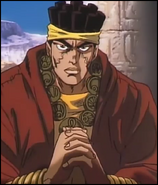 Avdol in the 1993 OVA of Stardust Crusaders. 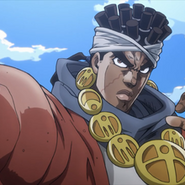 Avdol in the Anime.
Add a photo to this gallery
Retrieved from "https://a-bizarre-day-roblox.fandom.com/wiki/Avdol_NPC?oldid=603293"
Community content is available under CC-BY-SA unless otherwise noted.