"I will make you a master of the sword. No one is stronger than you...use me and kill!" - Anubis (Anubisu-shin, アヌビス神)

65% of damage
Anubis is a minor antagonist featured in JoJo's Bizarre Adventure: Stardust Crusaders. Despite being a character, however, Anubis takes the form of a spirit that possessed a sword, making the sword the Stand.

It is most effective in close-range combat, as it has a variety of moves that can deal good damage to any opponent when used correctly.

This Stand is a part of the Arrow Stand Pool, in which it has a 16.5% chance (C-Tier percentage) of obtaining it from a Stand Arrow.

Anubis appears as an approximate version of the mythological Anubis it's named after Egyptian mythology, with a human body and a jackal head.

It's bound to a thin scimitar with an elaborate, jeweled-encrusted cross-guard complete with a scabbard. However, rather than Anubis itself, only the sword appears in-game, rather than the Anubis God.

For the sword itself, The sword has an angelic look, it has a long grip, following with a long curved blade. Befitting its namesake, Anubis possesses a black lead in both the colored manga and anime. Its headdress is also yellow in both media.

Anubis, despite seeming simple and not that strong, can actually hold its own against even the toughest stands, including Over Heavens. Despite appearing simple, Anubis is actually quite complex, comparable to that of Shadow The World. Anubis can use its RNG based damage range to its advantage, granting varying damage on combos which can grant you higher damage then normal. Anubis can also ignore counters because its slashing moves are actually considered projectiles, so they will go through counters that are vulnerable to projectiles. Anubis is a fast stand with great pokes such as possessed E and F, and unpossessed m1 and E. A large part of the gameplay will involve something known as a 'Parry dash'. What this means is while using parry, you are able to roll or cancel into another move, this is your main combo starter and should be used often, it is important to get this down (Note that it is recommend you are to the left of your opponent when using this move, as it will otherwise miss due to the hitbox registration). During combat, you don't want to stay in neutral (both players playing defensively waiting for something to happen), a big part of the game plan is to bait your opponent into making a mistake, and swiftly punishing. You are able to do this until you basically win. Anubis, while not the best combo stand, has some good combo potential and damage, especially with using a parry dash as a starter. Make sure you understand your options and you can win against most stands.

The Animation of Anubis Possessing the User. 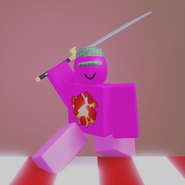 Anubis and its slave menacingly posing.

A sideways view of Anubis. 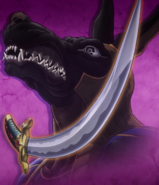 Anubis in both its forms as seen in the Anime.