Angelo (Retired)
The Angelo Stone is a stone found in Peaceful Park. So far, it has no real purpose, other than decoration.

Angelo Stone has the shape of a human face but in the form of a rock. It is weirdly shaped when in the form of a rock, as it has the form of Angelo (Anjuro Katagiri)'s face before his inevitable worse than death situation. Next to the stone is a sign saying "pls pay ur respects to angelo". During Christmas 2020, the sign changed to "its beginning to look a lot like chungsmas", and afterward it was changed to "the end is near".

This stone is based on JoJo's Bizarre Adventure: Diamond is Unbreakable when Josuke and Jotaro defeated Angelo, Crazy Diamond turned Angelo into the stone using its Restoration ability. Josuke fused him even further with the rock, effectively turning Angelo into a hideous statue that becomes a historical landmark for Morioh.

Angelo Stone in the new map before it got revamped. 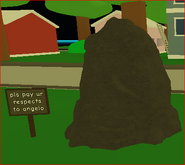 Angelo Stone in the old map.

Angelo stone on the older map. 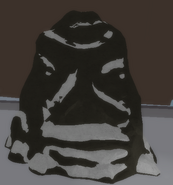 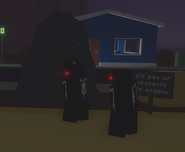 Angelo in the Halloween 2020 Event.

Angelo in the Christmas 2020 Event. 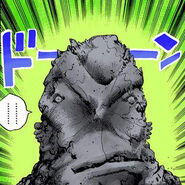 Angelo Stone in the manga.

Angelo Stone in the anime.
Community content is available under CC-BY-SA unless otherwise noted.
Advertisement