A Bizarre Day (Roblox) Wiki
Register
Don't have an account?
Sign In
Advertisement
in: Live Event, Locations, Landmarks,
and 3 more

When you touch the portal in order to gain access to the Alternative Universe, you will end up in another game, thankfully, your data will not be lost (Ability/Bank/Samurai Progress). If you want to leave this "Alternate Universe" there is no way to do that, but you can return to the Original Universe if you leave and join A Bizarre Day again.

You could also farm Stands in the Alternative Universe, it was better than farming in the Original Universe since the map was much smaller than the normal map. However, it wasn't really a good map for fighting (PVPing) due to its small size.

This Alternate Universe is sadly now removed. This means it can no longer be visited.

The Alternative Park seems to be pretty self-explanatory, it is a vast open area, with trees and a fountain of a Dummy. 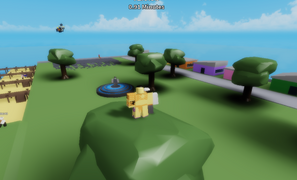 Overview of the Alternative Park. 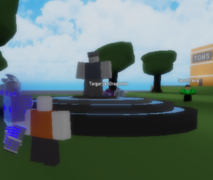 Closer look at the Dummy Statue.

The Alternative Neighborhood is a part of the Alternative Universe World that have houses and a street. This part is supposed to represent the "city" part of each map that was in ABD. There was nothing inside the houses.

Overview of The Alternative NeighborHood.

The beach, also self-explanatory, is an area covered by sand. The Beach that's main point is the opening for the ocean, the Beach has 4 Decks, with no features on it, and 2 Rafts also no features on it. 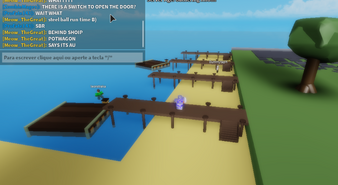 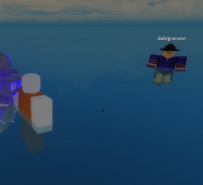 TOMS is the alternate universe of Tom's Shack, TOMS seems to be a 3-story building owned by TOM AU. Inside the store, there is an NPC called TOM AU, a shelf containing items like, Monochromatic Sphere, Cameras, Stand Arrows and Rokakaka Fruits (These items aren't intractable.), there is also a Mini figure of TheGuestToBlame with his iconic Stand, Pot Platinum. There are also Dummies outside.

Further exploring TOMS, we can find a Door with a text written: "No admission for unauthorized" Opening this door, reveals a room full of boxes and Whitesnake's DISC. There are also 2 Discs, but they aren't important. One thing that is important to the lore, in this universe, there were 1 Mini-Figure of Pot-Platinum and it's user and some Discs, in the Original Universe, we can see both of these items behind of the waterfall, it is assumed that someone gathered these items and hid those items behind the waterfall.

Tom AU seems to be an exact copy of Tom but he's from an Alternate Universe. He still sells the same things. 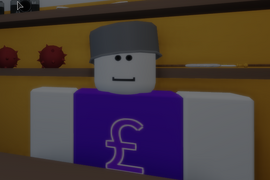 TheGuestToFlame is the alternate universe version of TheGuestToBlame, owner of A Bizarre Day. Although this NPC isn't interactable, this NPC will take damage. Also, TheGuestToFlame's torso seems to be a little glitchy. 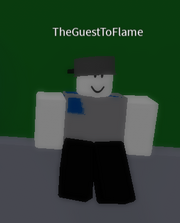 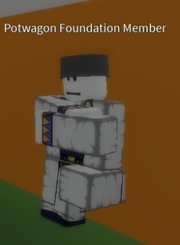