Behind the 1v1 Arena

Players and dummies
The Airport was a special location in ABD. Its purpose was only to be a decorative piece and a hangout spot for the map.

The only entrance to the airport is a wooden bridge. The Airport consist of a tower, another Soccer Field (1v1 Arena), and a runway. There are 3 Enhanced Holodummies at the airport.

This location was removed because a new map was released.

You get into the airport after crossing a bridge, the airport itself is pretty basic and has no special features.

The Airport tower is a very tall tower which has a lookout on its top. You can take dominance at the top.

Another 1v1 Arena is a version of the original 1v1 Arena but with a roof, which makes Stand Jump useless and the middle circle is gone.

A alternative version of the Soccer Field (1v1 Arena). 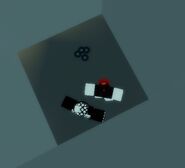