The house takes the appearance of a Dojo, with a dark crimson color covering its roof and walls, while white colors cover its pillars, stairways and windows. The main building is supported on a huge rock, while the stairway leads a player inside the Dojo. On the outside of the building, there are several lanterns, benches and bushes that surround the building.

In the Halloween event, the dojo was decorated with pumpkins and spider webs, just like some other locations in the game.

The inside of the Dojo is pretty much empty. It only has the Samurai Teacher standing by the wall, a cardboard box at the right corner, a glass box that contains a Samurai's sword and a piece of paper with morse code on it, hanging on the wall, next to the teacher. 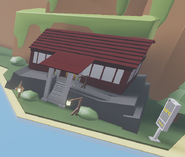 Old model of A Bizarre Dojo.

A view of the inside of the Dojo. 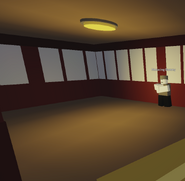 A further view of the old Dojo. 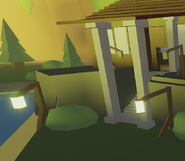 Entrance to the dojo.

Weather panel located outside the dojo.

The morse code on the wall. 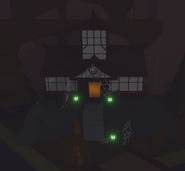 A Bizarre Dojo in the Halloween event.
Community content is available under CC-BY-SA unless otherwise noted.
Advertisement