All posts by Sabbeth69

STOP STOP IT PLEASE I BEG YOU

You think they look at the fandom posts?

I while ago i made a post saying that we more stands that exist in the jojo cannon. following that post @Plsrebuffstw made a Killer Queen:AU concept page. i then made pages for Spice Girl, Weather Report, Speed King, and Scary Monsters. since then, in both posts and blogs. this may not have been caused entirely by me, but I feel like the current surge was at least in part because of me. Im glad that we are sharing our ideas!

Scary Monsters is the stand of Diego Brando, and the previous stand of Franz Ferdinand. It gives its user powers of dinosaurs, such as claws and a tail, and allows it user to turn into a dinosaur. in Diego case, it was a blue Utah Raptor, lined with the words"DIO" on its side, and yellow spines on its back. it also creates a virus, that turns organisms into dinosaurs, which can be controlled by Scary Monsters user.

T:Dino Summon: The User spawns 4 dinos, working like D4Cs clones following the nearest player, biting them, dealing 4 damage per bite. the clones de-spawn after 45 seconds, have 75 hp, and has a 25 second cooldown

H: IM GOING TO KILL YOU DEAD! USHAAAAAAAAA! the user upercut while jumpin, then chops down with a falling chop, dealing Godly damage(65 dmg) 60 second cooldown

F: Scary Monsters: The user turns into a dinosaur, giving a new moves

E: Bite: The user bites quickly, dealing ok damage, but has a 2 second cooldown and is spammable

V: pounce: the user leaps forward, similar to human forms leap, but if one lands on a player, they will maul them, dealing 25 damage, and has a 5 second cooldown.

"USHAAAAAA!" "I won! you have proven the weakness I knew you had!"

''I won! now everything belongs to Diego!"

(edited by Sabbeth69)
A reply to MaximusTheBlueWolf
0

Poll over! speed king is up, ECHOS and Green day tommorow!

Speed King is the stand of Jobin Higashikata, featured in JoJo's Bizarre Adventure part 8, JOJOLION. it has the form of a humanoid mannequin like robot, wearing a spiked fisherman cap and googles. two horns jut out its side of its head, and a gaping mouth bearing gritting teeth. it has a fur covered torso, in in all colored media it appears shades of red.

PASSIVE: The Boiling King: all attacks have fire damage

T: Eruption: Speed king taps its prey, and then causes them to erupt in flames, godly damage (80 dmg) 60 second cooldown.

Speed king is a little unexplained, so take my page with a grain of salt

One vote for speed king does not count, i voted to see answers :P

This is a profile of the stand Weather report i came up with.

Weather Report is the stand of the prisoner, Weather report, featured in JoJos Bizarre Adventure: Stone Ocean. It takes the form of a muscular humanoid mass of clouds, often surrounded by mist/clouds. it has a mask like face, with spikes on its head, red eyes with vertical strips through it, knuckle bracers, and wing like shoes, similar to the Greek god Hermes.

Y: Cold Blooded: The user points at the person their cursor is on, freezing their blood, stuning them, then shattering their blood, incredible damage (50 dmg) 60 second cooldown

V: Tornado launch: Weather Report claps their hands, firing a tornado from their hands, that sucks up any player it crosses, spins them while doing 20 dmg twice, then tosses them out. great damage ( 40 dmg total)

Z: Stand Suit Flight: Weather Report summons a suit of clouds around their user, allowing them to fly, 8 second cooldown

F: Heavy Weather: Weather Report summons a its strongest form, giving it a new moveset. this mode is like GER/UGER, lasting 120 seconds and having a long cooldown

R: Rainbow web: Heavy Weather creates a large, sparatic web of rainbow, turning anyone who touches it into a snail, with a similar look and animation to Hirophant greens Hirophant barrier, N/A damage, 20 second cooldown

H: Oxygen Concentration: Similar to Purple Haze's Virus Dome, Heavy weather turns the oxygen up in the server to a hospitable state, dealing 2 damage every second for 15 seconds. Made In Heavens during Time Accelerate take 2 damage every half second. great damage( 60 dmg max) 45 second cooldown

"do we need to fight this out?" "weather report manipulates the weather" 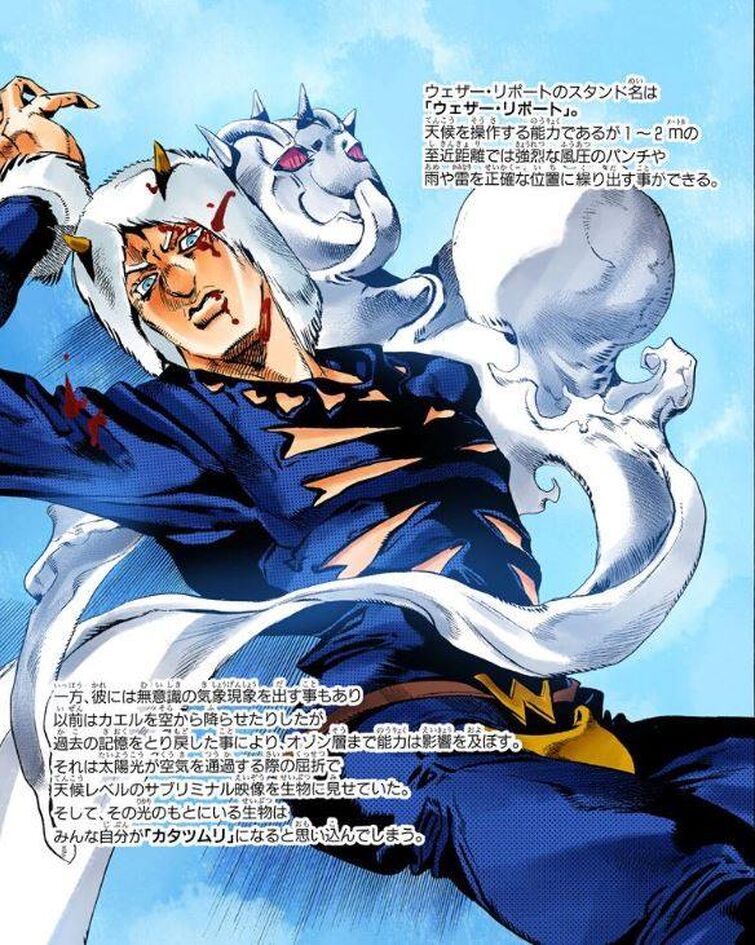 Thanks! i wanna try and make great concept pages for stands to show to devs! any other stands i should try?

Why fuck me huh?